As we approach the season of excess, an admonitory posting about food. Just over a year ago we published a post on the metaphor of feeding during the war, with particular reference to the idea of ‘feeding the guns’ (http://languages-and-first-world-war.tumblr.com/post/151399586576/feed-the-guns#notes ), but also noting the crossover between foodstuffs and weapons. A taster:

Certainly physical resemblance to foodstuffs made the crossover of terms a natural development: ‘pineapple’, ‘toffee-apple’, and ‘egg’ were names of bombs, with larger shells being called ‘plum puddings’ and ‘sausages’, while foods were given the names of projectiles – ‘dumdums’ (beans), ‘zeps in a cloud’ (sausages in mashed potato) & ‘hand grenades’ (meatballs). Early in the war jam tins were used for making bombs for throwing. Long after such rudimentary applications had been superseded American forces were calling German grenades ‘jam pots’; despite an apparent difference in appearance Jonathan Lighter notes (Slang of the AEF) that this referred to ‘evidently the potato masher’. Lighter’s glossary also gives ‘pepperbox’ for the machine gun and ‘shrapnel’ for grape-nuts. American soldiers became so used to soup that the field kitchen was called a ‘soup-gun’, corresponding to the German Gulaschkannone. According to Karl Bergmann in Wie der Feldgraue Spricht (1916) among the names for hand-grenades were ‘apples’ and ‘bananas’, and round French mines were called ‘Edamer Käse’ (edam cheese); and ‘wieder andere Minen sehen bei ihrem wackeligen fluge wie Wurste (Blutwurste) aus’ [other mines with their wiggly flight were called Wurst, or Blutwurst]. Bergmann gives also Knallbonbons for the fragments thrown from an exploding grenade ; Dechelette in L’Argot des Poilus (1918) has ‘bonbons’ as bombs carried by bombing planes.

Karl Bergmann, in Wie der Fedgraue Spricht (1916) also says that the names given to hand-grenades depended on their shape; these included frogs, crabs and turtles, but also bananas, and because they were made from tin, they were known as ‘Delikatessen’; and also known as ‘Knallbonbons’, not sweets but ‘Christmas crackers’. French mines, round in shape, were called Edamer Käse (Edam cheeses).

The list no doubt could be continued, as the culture of food was extensive, both for those who had liberal access to it and the many who did not. Obsession with food continued through the war as it became less available. This poem from the trench journal The Lead-Swinger was published on 18th September 1915.

This postcard, printed in Chicago, and sent from Winnetka Illinois the previous day, gets a bit frenetic; and note the non-standard spellings ‘aley’ and ‘champaigne’, and the inclusion of ‘turkey trot’ and ‘navy beans’, which would have been known to few British people. 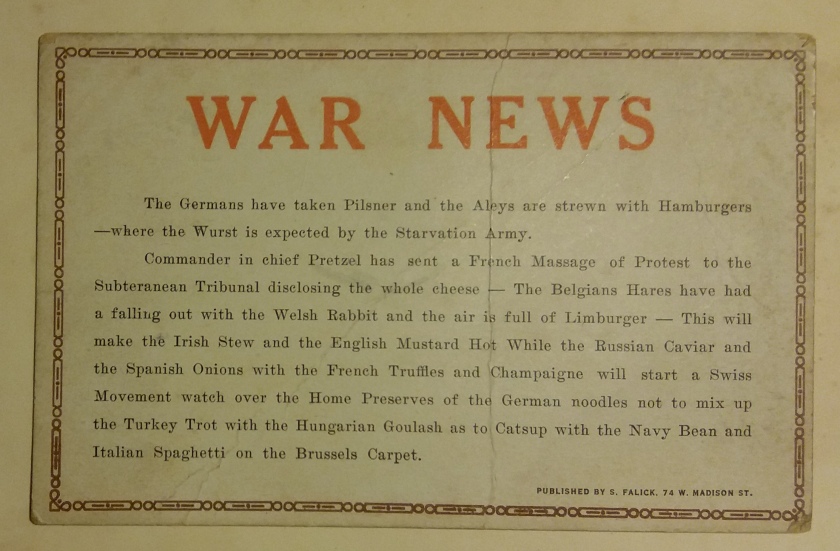 Puns about food and the materiel and politics of war were used by all sides. The plate dates from the period before the general adoption of ‘Serbia’ rather than ‘Servia’, i.e. the autumn of 1914. The text is typical of the frivolous nature of some 1914 social propaganda.

The German menu postcard below seems to match the frequently used caricature of the Kaiser wanting to eat the world, by offering the various countries ranged against Germany as ingredients. Compared to the French slang list, it roams between fierce and simple ‘marinated Frenchmen’ and the more conceptual ‘London worry’, with an improbable Belgian goulash in between; many ingredients are ‘gebraten’ (fried), but there’s a directness in the final statement that the bill would be paid by Nicholas, Poincaré and George, rather contrasting with the French, ‘now, if there’s anything else you want, you only have to ask’. The apportioned costs are worthy of query; what thinking lay behind pricing Engländer mit Sauerkohl lower than Gezwiebelte Russen?

One thought on “More food”