When looking at slang words in English that were acquired from other languages during the First World War our first reaction tends to be to admire the twists of sound and word involved in anglicising the foreign. It is a process that has a long past, generally described as ‘folk etymology’ in the turning of ‘avocado pear’ into ‘alligator pear’ or ‘asparagus’ into ‘sparrow-grass’. Essentially it involves grasping the unknown and forcing it into the frame of the known. If there is some assistance, for example the skin of the avocado, not hugely unlike that of the alligator, then so much the better; if not, it doesn’t matter much anyway. The Reverend A Smythe Palmer made an extensive and entertaining study of the subject, published in 1882, with the subtitle ‘A dictionary of verbal corruptions or words perverted in form or meaning, by false derivation or mistaken analogy’, opening up a way of looking at the English language as something which has stumbled forward with a combination of mistakes, miss-hearings, laziness and xenophobia. The hold of a ship, for example, was originally the ‘hole’ or hollow part of the ship, the ‘d’ jettisoned to accommodate the meaning of ‘to hold’; a ‘clipper’, thought to be called so to indicate its speed, but actually deriving from the German klepper, a racehorse; a ‘toady’, imagined as someone unlikeable, keeping close to the ground, but offensive – which was in fact a development of the word ‘towardly’, meaning tractable and amenable. Palmer has great delight with dialect or regional words, such as ‘monkey-pee’, a Kentish word for a wood-louse, deriving from its resemblance to a multipede (now a millipede). English provides a fund of urban myths in this field, folk etymologies of folk etymologies if you like, such as the dismissal of something as nonsense with the words ‘all my eye and Betty Martin’, supposed to come from anglophone sailors who, as prisoners of war in Spain during the wars at the end of the eighteenth century, heard the words ‘ora pro me, Beata Mater’. Palmer’s book is conveniently divided into sections on ‘English words corrupted’; Foreign words corrupted’; ‘Proper names corrupted’ (particularly useful for tracing place names); ‘Corruptions due to coalescence of the article’ – such as ‘umper’ or ‘nickname’; and ‘Corruptions due to mistakes about number’.

Which brings us to the field of anglicisations of place-names and other words contrived by Anglophone soldiers in France and Flanders, the wonderful Ocean Villas and ‘Bombardier Fritz’ and their like. Words and the First World War contains a study of a selection of words to observe the process of anglicisation by sound or sight: the move from Auchonvillers to ‘Ocean Villas’ works by sound, while Doignes to ‘Dogs knees’ works by vision, as do Aix-les-Bains (Aches and pains) and Busnes (Business). How Godewaersvelde got to ‘Gertie wears velvet’ was probably a mix of both.

A key figure in the business of communication across language barriers was the Dolmetscher, the interpreter. Dolmetscher to ‘dull major’, noted by Fraser & Gibbons and Brophy & Partridge, was probably a transfer via sound; however, the form ‘dull major’ is hard to find. Knowing that the German interpreter had the ability to make PoWs’ lives much worse than necessary, perhaps Anglophone prisoners chose not to risk upsetting that useful person. Note here, for example, even where Frank MacDonald’s comrades in The Kaiser’s Guest (1918) are shown having a laugh at their captors’ expense (fairly easily recognizable from schooldays), the writer avoids the term ‘dull major’. 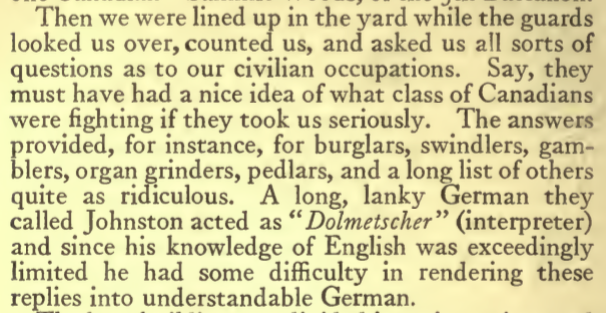 But also, the Dolmetscher was the term for the prisoner who spoke German and could act as an interpreter for his fellows, as here in Henry Mahoney and Frederick Talbot’s Sixteen Months in Four German Prisons (1917); you would be even less likely to call your comrade a ‘dull major’, however good a play on words it seemed.

Sadly Palmer died on 10 July 1917; it is a shame that he did not revise his work in the light of anglophone soldiers’ fun and games with French, German, Italian and so on; but curious that British social propagandists did not pick up on his observation of the origin of the pickelhaube. Had they done so we might have had another epithet for the German soldier.