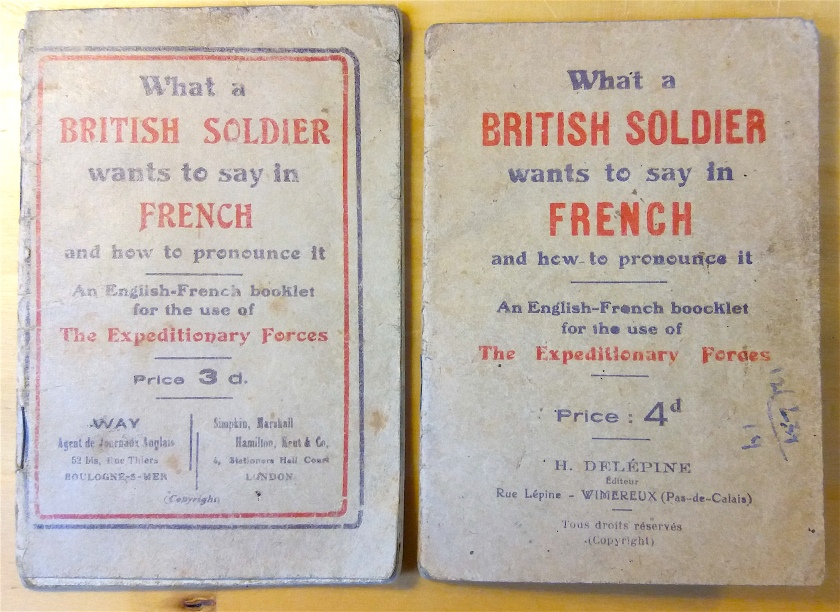 What can be learned from the comparison between two editions of the same soldiers’ phrasebook from the early part of the war? Abbé H Delépine (possibly Abbé Henri Delépine, the composer, any information anyone?) wrote a small booklet titled What a British Soldier wants to say in French and how to pronounce it. This was published in 1914 with both Way, Agent de Journaux Anglais, 52 bis, Rue Thiers, Boulogne-sur-mer, and Simpkin, Marshall Hamilton, Kent & Co, 4 Stationers Hall Court, London, credited as publishers. The latter were a prolific publishing house whose products encompassed official publications, novels, manuals, history and religious books, and poetry. The booklet was subtitled as ‘An English-French booklet for the use of The Expeditionary Forces’, was priced at 3d, and contained the usual lists of words for food, clothing, parts of the body, objects and relationships, and the military, including the word ‘trench’, with their French equivalents, advice to be nice to horses (‘Be good to them. Remember that, being unable to speak, they cannot let you know their needs’), and the usual pronunciation guides, which allow a recreation of the accents to be heard at the time on the streets of Bermondsey and Bethnal Green rather than Boulogne-sur-mer: lah tran-chay (see above), lays arm (les armes), lay dwah (les doigts), ler moosh (war) der posh (le mouchoir de poche), oh rer-voar. 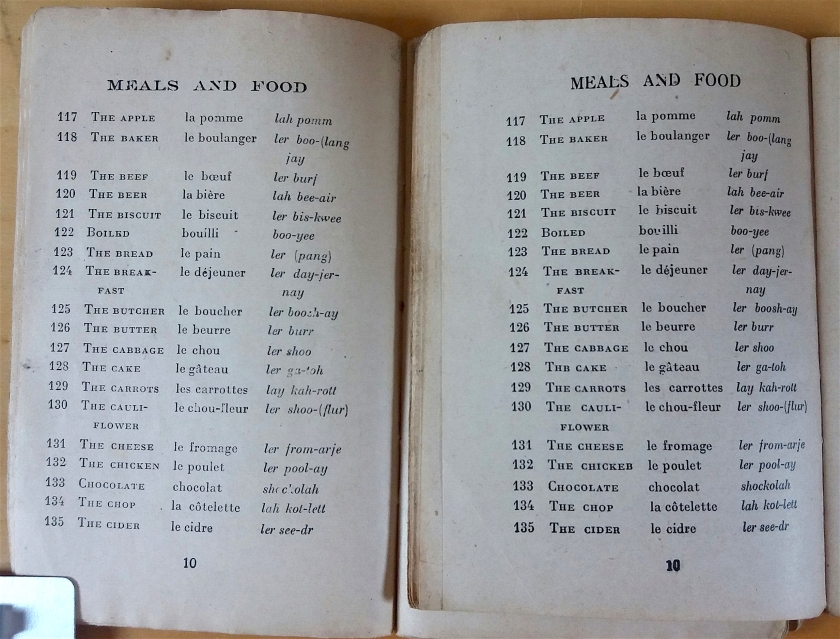 A further edition, priced 4d, retained the same information on the title page, but now announced the editor, H Delépine, Rue Lépine, Wimereux (Pas-de-Calais), and printed still in Boulogne-sur-mer. Indicative of differences between the two editions is the cover miss-spelling of ‘booklet’, with an intrusive ‘c’ in the second edition.

Errors were one difference between the editions, corrected or committed as the booklet was partially reset. Thus on page 8 of the 3d edition, concerning clothes, we see ‘The Thousers’ and ‘The Handherchief’, both corrected in the 4d edition, which in turn omits the hyphen from ‘The Looking-glass’, present in the 3d edition, and changes the pronunciation ‘sah-vong’ to ‘sa-vong’.

Occasionally an error is repeated – page 29 in both editions has ‘senenty-one’ (soixante et onze). Of more interest are inconsistencies in the pronunciation guide, which would be probably the most useful practical part of the book. Thus page 22 of the both editions gives the pronunciation of the French infanterie as ‘infaun-tree’, while two pages later a question using the word shows it transcribed as ‘in-fan-tree’. The first form is in brackets, following the practice laid out on the first page of the booklet, which states ‘it is impossible with some French words to express in English the exact sound. In such cases, the word is placed between parentheses, and the pronunciation given as nearly as possible’.

Perhaps the use of parenthesis here was related to the naval gunnery practice of bracketing, placing a shot beyond and before the target to establish the range. Parentheses appear again in pages 9 and 14 in two attempts to transcribe the French un, as ‘üng’ or ‘eung’ (both editions). 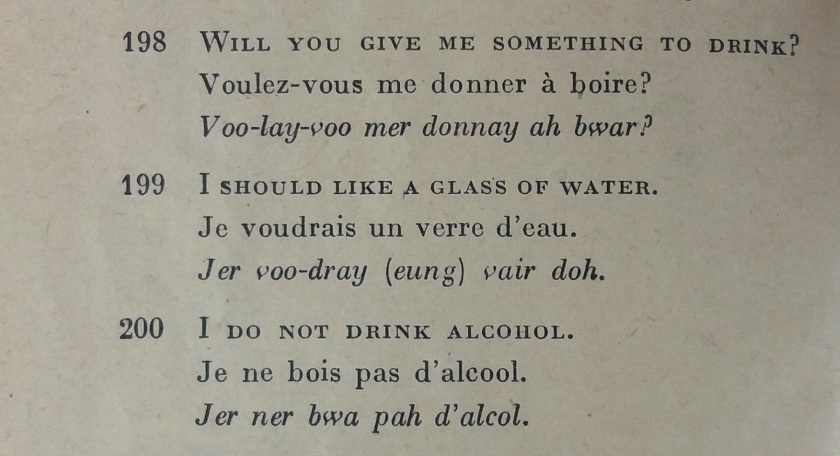 However, it is the back covers which show the greatest difference. The 3d edition addresses the home buyer, with exhortations to send copies ‘to your soldier friend’, or ‘to an Officer’, who will distribute them ‘at the Front or at the Camp’; or they may be sent to the Red Cross Society to be sent out in kit bags. It is good marketing, with scenarios to make the purchase seem more real and worthy.

The 4d edition directs itself to the soldier wanting ‘that confident touch’ that will only come with knowing colloquial French; it is an advertisement for a further book, Familiar French, ‘an indispensable supplement to any ordinary French phrase book’ – even one that advises you, as do both these editions, to ‘always keep this Boocklet in your pocket’. Though there is a typo – ‘The price in 4d only’ – prospective buyers are told to ‘ask for the yellow booklet’, not ‘boocklet’. The possibility of acquiring colloquial French is advertised by the use of colloquial English: ‘When you are puzzled as to the meaning of a French word you can’t find in the dictionary, it’s probably because it’s an idiom, or slang.’ ‘Can’t’ and ‘it’s’ create the intimacy of speech, rather than the muddle of what appears on the first page of each edition, under the heading ‘Most Important Notice About The Right Pronunciation’: ‘if you pronounce the syllable as if you were going to say “ang” but prevent the back of the tongue from touching the roof of the mouth, which makes the “g” sound, you will have a correct pronunciation’.

How familiar was Familiar French? Did it actually contain current Army slang, as claimed, and if so how did the author/editor, presumably Abbé Delépine, acquire this? Certainly more work was put into getting a colloquial tone for the advertisement than into proof-reading the rest of the book – though even here typos remained, perhaps the sign of a rushed publication hoping to exploit the New Armies’ language concerns.

Here again is the programme for this year’s LFWW conference:

Booking can now be done for the two days separately via: